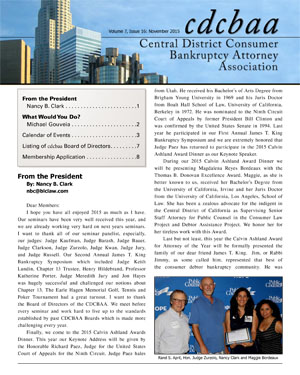 Dear Members:
I hope you have all enjoyed 2015 as much as I have. Our seminars have been very well received this year, and we are already working very hard on next years seminars. I want to thank all of our seminar panelist, especially, our judges: Judge Kaufman, Judge Barash, Judge Bauer, Judge Clarkson, Judge Zurzolo, Judge Kwan, Judge Jury, and Judge Russell. Our Second Annual James T. King Bankruptcy Symposium which included Judge Keith Lundin, Chapter 13 Trustee, Henry Hildebrand, Professor Katherine Porter, Judge Meredith Jury and Jon Hayes was hugely successful and challenged our notions about Chapter 13. The Earle Hagen Memorial Golf, Tennis and Poker Tournament had a great turnout. I want to thank the Board of Directors of the CDCBAA. We meet before every seminar and work hard to live up to the standards established by past CDCBAA Boards which is made more challenging every year.

Finally, we come to the 2015 Calvin Ashland Awards Dinner. This year our Keynote Address will be given by the Honorable Richard Paez, Judge for the United States Court of Appeals for the Ninth Circuit. Judge Paez hales from Utah. He received his Bachelor’s of Arts Degree from Brigham Young University in 1969 and his Juris Doctor from Boalt Hall School of Law, University of California, Berkeley in 1972. He was nominated to the Ninth Circuit Court of Appeals by former President Bill Clinton and was confirmed by the United States Senate in 1994. Last year he participated in our First Annual James T. King Bankruptcy Symposium and we are extremely honored that Judge Paez has returned to participate in the 2015 Calvin Ashland Award Dinner as our Keynote Speaker.

During our 2015 Calvin Ashland Award Dinner we will be presenting Magdalena Reyes Bordeaux with the Thomas B. Donovan Excellence Award. Maggie, as she is better known to us, received her Bachelor’s Degree from the University of California, Irvine and her Juris Doctor from the University of California, Los Angeles, School of Law. She has been a zealous advocate for the indigent in the Central District of California as Supervising Senior Staff Attorney for Public Counsel in the Consumer Law Project and Debtor Assistance Project. We honor her for her tireless work with this Award.

Last but not least, this year the Calvin Ashland Award for Attorney of the Year will be formally presented the family of our dear friend James T. King. Jim, or Rabbi Jimmy, as some called him, represented that best of the consumer debtor bankruptcy community. He was intelligent, knowledgeable, sensitive and compassionate. Judges, Trustees, opposing counsel all admired and respected him. His fellow debtor bankruptcy colleagues loved him. He gave to our community until his last breath. Those of us who knew him are better people for having known him. Before he passed away earlier this year, we were able to present him with the Calvin Ashland Award for Attorney of the Year. He is greatly missed and will never be forgotten.

Thank you all for your participation in the CDCBAA. It has been a privilege serving as your President this year and I look forward to 2016.