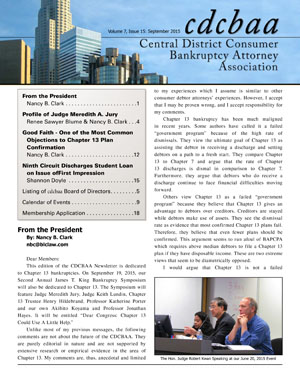 Dear Members:
This edition of the CDCBAA Newsletter is dedicated to Chapter 13 bankruptcies. On September 19, 2015, our Second Annual James T. King Bankruptcy Symposium will also be dedicated to Chapter 13. The Symposium will feature Judge Meredith Jury, Judge Keith Lundin, Chapter 13 Trustee Henry Hildebrand, Professor Katherine Porter and our own Akihito Koyama and Professor Jonathan Hayes. It will be entitled "Dear Congress: Chapter 13 Could Use A Little Help."

Unlike most of my previous messages, the following comments are not about the future of the CDCBAA. They are purely editorial in nature and are not supported by extensive research or empirical evidence in the area of Chapter 13. My comments are, thus, anecdotal and limited to my experiences which I assume is similar to other consumer debtor attorneys' experiences. However, I accept that I may be proven wrong, and I accept responsibility for my comments.

Chapter 13 bankruptcy has been much maligned in recent years. Some authors have called it a failed "government program" because of the high rate of dismissals. They view the ultimate goal of Chapter 13 as assisting the debtor in receiving a discharge and setting debtors on a path to a fresh start. They compare Chapter 13 to Chapter 7 and argue that the rate of Chapter 13 discharges is dismal in comparison to Chapter 7. Furthermore, they argue that debtors who do receive a discharge continue to face financial difficulties moving forward.

Others view Chapter 13 as a failed "government program" because they believe that Chapter 13 gives an advantage to debtors over creditors. Creditors are stayed while debtors make use of assets. They see the dismissal rate as evidence that most confirmed Chapter 13 plans fail. Therefore, they believe that even fewer plans should be confirmed. This argument seems to run afoul of BAPCPA which requires above median debtors to file a Chapter 13 plan if they have disposable income. These are two extreme views that seem to be diametrically opposed.

I would argue that Chapter 13 is not a failed "government program" and if practiced properly, works fairly and equitably for all parties concerned. I believe that when you have a chapter that is dependent on payments made over a number of years, and which seeks to balance the interest of creditors and debtors while those payments are being made, a lower rate of discharge is a reasonable outcome. In Chapter 13 cases, Debtors are afforded an opportunity to save their homes and vehicles while making payments to creditors based on a workable structure under the supervision of a judge. Furthermore, we must accept that there are competing interests in Chapter 13 not only between debtors and creditors but also between classes of creditors. There is a balance that must be reached between providing debtors an opportunity to reorganize while treating creditors equitably. The rate of dismissals may out pace discharges, but that in and of itself does not equal failure.

To address the critics of Chapter 13, I believe we must first eliminate all the pro se filings from the calculation. Debtors are being advised by non-lawyers to file Chapter 13 for improper purposes. These Chapter 13 bankruptcies have no hope of succeeding and should not be factored into the discussion of the success or failure of Chapter 13 cases. Once we eliminate the number of pro se filings from the calculation, I believe we would find that chapter 13 is far more successful than the current perception.

Despite the overall rate of dismissals, some attorneys have reported that up to 48 percent of their confirmed Chapter 13 cases complete and the debtors receive a discharge. Given the overall percentage of dismissals this is evidence that Chapter 13 is not a failed "government program." In addition, it is evidence that when a debtor is properly represented, they have a higher degree of success. We need to encourage debtors to seek out competent bankruptcy attorneys.

Furthermore, it appears that certain combinations of dedicated consumer attorneys, Chapter 13 trustees and judges yield higher discharge rates than others. Chapter 13 trustees and judges who are more broadminded about "reasonable" expenses and budgets, allow for sufficient time between the 341(a) hearing and confirmation hearings for matters to be resolved, allow continuances to resolve post confirmation matters, and work with debtors to resolve issues, not surprisingly, saw higher numbers of confirmed Chapter 13 plans reaching discharge. Although, the numbers were calculated from a relatively small sample, the combination of a broadminded trustee and judge and dedicated consumer attorney resulted in a rate of discharge that was 10 percent higher than their counterparts. I would venture a guess that these combinations would result in a higher disbursement to creditors as well.

As a consumer debtor attorney it is difficult for me to be unbiased regarding any discussion that starts with the premise that Chapter 13 is a failed "government program." I do not view Chapter 13 as a "government program." In addition, I pride myself on navigating the challenges of Chapter 13. However, I must concede that the number of dismissals out pace the number of discharges. To practitioners, it is not surprising that Chapter 13 has a lower discharge rate than Chapter 7s as it is administered over years as opposed to months. In addition, unlike Chapter 7 cases where debtors must show that they have no disposable income and have not committed fraud to receive a discharge, Chapter 13 repayment plans pit debtors against the various classes of creditors and the various classes of creditors against each other. These competing interests are hard to satisfy and, therefore, a comparison of Chapter 13 to Chapter 7 is inappropriate.

In order to improve the current practice of Chapter 13, I believe we need to examine why cases are dismissed and what seems to work in cases that are not dismissed. In most instances, the high number of dismissals is attributable to the failure of the debtor to adhere to the terms of the plan, either due to their budgets being too tight, or due to the loss of a job, health issues, family obligations, etc. Whenever you have a chapter where the discharge is dependent on payments over several years, there are bound to be unanticipated events that cause a plan to fail. In fact, it would be fair to say that unanticipated events are unavoidable. The Bankruptcy Code resolves this issue by allowing debtors to modify or suspend plan payments. However, it takes time to prepare and submit a modification. When trustees, judges and creditors allow for the time for modifications to be prepared, filed and considered, debtors are afforded an opportunity to reach a discharge.

Some dismissals can be attributed to the quality of representation of debtors. Attorneys who specialize in bankruptcy and attend MCLE classes such as those provided by CDCBAA have a higher rate of success than general practitioners who file only a handful of bankruptcy cases every year. It is difficult for debtors to navigate a Chapter 13 to discharge without the assistance of competent consumer bankruptcy counsel. To increase the rate of discharges, attorneys should be sanctioned for poor work and ordered to take continuing education classes in bankruptcy. In addition, debtors should be allowed an opportunity to consult with a competent bankruptcy attorney. The CDCBAA, like many consumer debtor attorney organizations provides the general public on its website a list of its members and whether or not they are certified as Bankruptcy Specialists.

When trustees favor the best interest of creditors over debtor's ability to pay, many issues arise which lead to dismissals of cases. What is a reasonable expense for a debtor in Chapter 13 is often subjective. As consumer bankruptcy practitioners, we advise our clients regarding their expenses. Most debtor's monthly expenses fluctuate depending on various factors such as their children out growing their clothing, or maintenance of a vehicle or home, health or dental issues as they arise, the amount they spend on utilities based on seasonal changes, etc. Most expenses are not fixed and vary from month to month. We know this to be true and must propose reasonable budgets that factor these variables. However, some trustees and creditors who advocate for unreasonably lean budgets find that the debtors’ proposed budgets are overly generous and object to confirmation. Such trustees believe the amounts provided by the IRS Manual for expenses to be overly generous and argue for even leaner budgets. For example, a trustee may argue that a debtor's food budget should be limited to the USDA amounts awarded for food stamps. The IRS Manual allows a single individual $315.00 per month for food. The USDA food stamp program in California only allows a single individual up to $194.00 per month for food (and as little as $151.44). These are fairly big differences. While it may be true that a trustee who insists that debtors reduce their food budget to the USDA food stamp amount as opposed to the higher IRS Manual amount will succeed in obtaining a higher percentage for the general unsecured creditors, this kind of budget scrutiny ultimately results in earlier dismissals because these budgets are unsustainable. When you combine trustees who believe in excessively lean budgets and judges who rely heavily on the Chapter 13 trustees’ judgment and are disillusioned with Chapter 13 bankruptcy, there is a danger that parties can influence a debtor to agree to a higher percentage plan that is doomed to fail. In order to increase the number of cases achieving a discharge, budgets must be reasonable and realistic given the financial variables debtors face during years of payments. Higher percentages, although attractive to the trustees, do not necessarily make for successful Chapter 13 cases. If our goal is to increase the number of Chapter 13 discharges, it is better to have a reasonable, realistic budget, a lower percentage with a sustainable plan payment that can go the distance than to confirmed a plan with a higher percentage that is doomed to fail. Distribution to creditors might be higher in the short term but so will dismissals. If we truly commit to assisting Chapter 13 debtors in achieving a fresh start, we need to balance distributions to creditors with discharges for debtors.

In this humble attorney’s opinion, Chapter 13 is not a failed "government program." We save thousands of debtors from losing their homes and vehicles while they pay secured and unsecured creditors millions and millions of dollars. Is there room for improvement? Yes! To further improve the rate of discharges, we need to encourage trustees and judges to allow for truly reasonable budgets, sustainable plans and opportunities to resolve matters. When trustees, judges, and attorneys work together to resolve matters, higher numbers of Chapter 13 cases result in discharges. Unless we change how we practice Chapter 13 bankruptcy, dismissals will remain high and naysayers will continue to characterize Chapter 13 as a failed "government program."

The upcoming James T. King Bankruptcy Symposium will address many of the issues raised herein, and will discuss outside the box solutions. I encourage you all to attend the seminar as it is sure to be one of our best seminars yet.