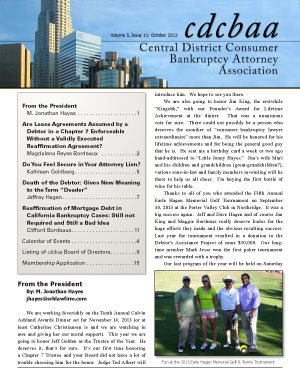 Another year has gone by and we are now working feverishly on the Eleventh Annual Calvin Ashland Awards Dinner set for November 6, 2014. This year we are going to honor Judge Sheri Bluebond as the Judge of the Year. She deserves it, that’s for sure. Judge Bluebond will be sworn in as the new Chief Judge of the Central District of California in late January 2015. Judge Scott Clarkson will introduce her. We hope to see you there.

Nancy Clark will be sworn in at the dinner as our new President for 2015 along with her Vice-President Peter Lively. She will introduce her new board as well. We are looking forward to that obviously. I will step down as president but will remain on the board. I really believe we are a unique organization. We are the lawyers in the trenches. Our 200 plus members are involved in probably half of all the attorney-filed cases in the Central District if not more. We have numerous certified specialists attend every meeting. If you are interested in getting involved contact Nancy Clark or let me know and I will pass it along. We have various committees which could use some new blood and new ideas are always welcome.

Thanks to all of you who attended the Sixth Annual Earle Hagen Memorial Golf Tournament on September 29, 2014 at the Porter Valley Club in Northridge. It was a big success again. Jeff and Dave Hagen and of course Jim King and Maggie Bordeaux really deserve kudos for the huge efforts they made and the obvious resulting success. Last year the tournament resulted in a donation to the Debtor’s Assistance Project of some $30,000. Our long-time member Mark Markus won the poker tournament and was rewarded with a trophy.

Our last program of the year will be held on Saturday morning October 25, 2014 at Southwestern Law School. Ray Aver, our litigator extraordinaire, will do the program with a local judge. Litigating Contempt and Stay Violation Actions, Proving Damages will be useful to all of us as violations of the automatic stay and discharge injunction are surprisingly common. Our programs are meaningful to our members in their everyday practice as Ray's program will attest.

We expect to have eight Saturday morning programs again for next year. As always the meeting will be free to members and you get two hours of MCLE each. The Ninth Annual Ninth Circuit Review will be January 24, 2015. Judge Victoria Kaufman will do the program with me. We will also have the new judge in the Woodland Hills division on the panel.

Our First Annual James T. King Bankruptcy Symposium was a rousing success last July. We are planning the program this coming year for a late July - early August Saturday morning. The program will feature chapter 13 and we have lined up a couple of extraordinary speakers. Once again, the Supreme Court has accepted cert in a bankruptcy case from the Seventh Circuit focusing on the Stern-Bellingham issues of bankruptcy judicial power. We expect oral argument to be in January and are thinking about organizing a trip to watch the supremes in action. Let me know if you are interested.

Say hi if you see me around. Thanks. Jon Hayes.