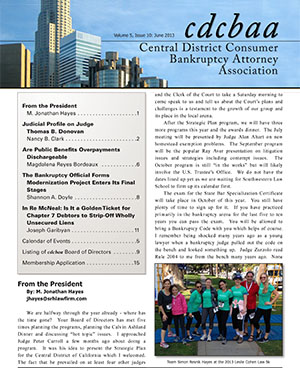 We are halfway through the year already - where has the time gone? Your Board of Directors has met five times planning the programs, planning the Calvin Ashland Dinner and discussing “hot topic” issues. I approached Judge Peter Carroll a few months ago about doing a program. It was his idea to present the Strategic Plan for the Central District of California which I welcomed. The fact that he prevailed on at least four other judges and the Clerk of the Court to take a Saturday morning to come speak to us and tell us about the Court’s plans and challenges is a testament to the growth of our group and its place in the local arena.

After the Strategic Plan program, we will have three more programs this year and the awards dinner. The July meeting will be presented by Judge Alan Ahart on new homestead exemption problems. The September program will be the popular Ray Aver presentation on litigation issues and strategies including contempt issues. The October program is still “in the works” but will likely involve the U.S. Trustee’s Office. We do not have the dates lined up yet as we are waiting for Southwestern Law School to firm up its calendar first.

The exam for the State Bar Specialization Certificate will take place in October of this year. You still have plenty of time to sign up for it. If you have practiced primarily in the bankruptcy arena for the last five to ten years you can pass the exam. You will be allowed to bring a Bankruptcy Code with you which helps of course. I remember being shocked many years ago as a young lawyer when a bankruptcy judge pulled out the code on the bench and looked something up. Judge Zurzolo read Rule 2004 to me from the bench many years ago. None of us have it memorized so don’t worry about it. It helps to read one of the many books around which provide a basic overview of bankruptcy. It helps to go to the Dennis McGoldrick - Wes Avery reviews. If you do not have sufficient MCLE hours, you will be given additional time to do that.

I want to take this opportunity to congratulate Peter Lively, Professor Peter Lively that is, on his induction to the American College of Bankruptcy this year. That is a huge honor for him and well deserved. You cannot ask to join that group. Persons being considered for membership are not told they are being considered. Congratulations Peter. We also must congratulate Maggie Bordeaux for her receipt of the Henry Sommer Scholarship, described as “A scholarship for a legal aid attorney in recognition of the extraordinary contributions to NACBA by President Emeritus Henry J. Sommer, who served on NACBA’s Board from 1992 to 2011 and as President from 2005 to 2008.” There is sure no doubt she deserves that.

Finally our hats off to Leslie Cohen on the success of her 5k Run in April. Her efforts resulted in a contribution to the Debtor’s Assistance Project (“DAP”) of $7,500. A reminder to you all that the Earle Hagen Memorial Golf Tournament (and tennis Jim King keeps reminding me) will be held at Porter Ranch this year. Last year the tournament resulted in a contribution to the DAP of about $30,000.

Say hi if you see me around. Thanks. Jon Hayes